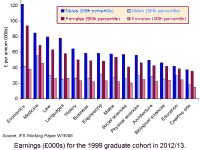 The IFS found “substantial” differences in the money people were earning, depending on the subject they took at university. Economists are most likely to be the top earners, by a clear margin.

“Medical students were easily the highest earners at the median ten years out, followed by those who studied economics. […] For males, it is estimated that approximately 12% of economics graduates earned above £100,000 some ten years after graduation; by contrast, 6% of those studying medicine or law earned more than £100,000.

The researchers recognise that some of these differences are due not to the degree itself but the type of people who apply for the degree. Even taking this into account, Economics (as well as Medicine) leads to “much higher earnings” than expected. One way to see this is to compare Economics students against those with similar A-Levels who took a creative arts subject.

One of the paper’s authors, Anna Vignoles of the University of Cambridge, is reported as saying,

“The research illustrates strongly that for most graduates, higher education leads to much better earnings than those earned by non-graduates, although students need to realise that their subject choice is important in determining how much of an earnings advantage they will have.”

Thanks to Prof. John Sloman for turning the IFS figures into a handy chart, which you can view or download from the link above.

Link: press release from the IFS and the full paper.

This entry was posted on Friday, April 15th, 2016 at 12:33 pm and is filed under Choosing a course, In the News, Jobs. You can follow any responses to this entry through the RSS 2.0 feed. You can leave a response, or trackback from your own site.

One Response to “Economics graduates are in the money”